Music from the Hart was founded in 2002 by musician and artist, Hart Gibson.

Hart spent his youth in Texas where he was influenced by Stevie Ray Vaughn and Billy Gibbons, his talent for blending different musical genres and creating his own unique style. With over 10 years of teaching music to diverse clientele, Hart has also partnered with community programs such as the YMCA and Center for the Arts in supporting youth music programs.

In 2005, The Music Camp was formed to support youth in extended musical interests. Group sessions in the camp provided students to explore their creativity with cultural music styles, varied instruments, vocals, and song writing. Many students of the camp have performed publicly and continue to aspire to musical careers. 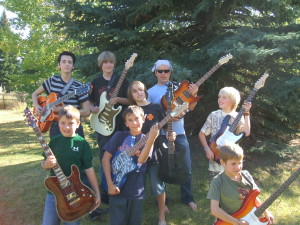 Throughout these programs Hart received positive feedback from parents and teachers validating that the youth in his programs had shown a decline in behavioral and social issues, and even lessening the needs of prescription medication. This inspired Hart’s musical passion to evolve the program further of helping others through music healing alternatives.

In 2008, Hart established and launched “Music from the Hart” providing musical healing alternatives to individuals with emotional, social, and physical challenges. The success of the music healing program supported the decision to extend beyond the local community to continue our outreach by transitioning “Music from the Hart” to the non-profit organization in March 2015.

Today, Music from the Hart includes 3 music mentors with over 50 years of combined musical experience, providing music healing sessions to over 75 students annually and growing. We work with Veterans, youth self-esteem programs, physically impaired, and individuals suffering from emotional and social disorders.